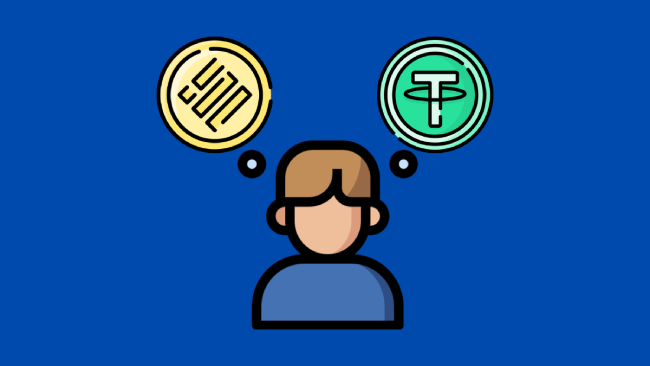 BUSD and USDT are part of a special group of cryptocurrencies called stablecoins. They are distinguished from classical cryptocurrencies by their stable value, both coins are pegged to the US dollar in a ratio of 1:1. In practice, the exchange rate deviates slightly from the ideal, but no more than three decimal places.

Stablecoins act as a kind of bridge between traditional and decentralized finance. They work on blockchains and provide fast international transfers with minimal fees.

In addition, stablecoins are used as safe-haven assets during periods of extreme market volatility and as intermediary assets. For example, direct conversion of AVAX to ETH is not possible on all sites where both coins are represented. In such cases, it can be much easier to make two consecutive transactions than to look for a platform that supports the desired trading pair.

How Does BUSD Work?

Binance USD (BUSD) was released in 2019. Now the coin takes the 7th place in the ranking of the most capitalized cryptocurrencies. It was developed by the Binance crypto exchange and Paxos. BUSD became the first stablecoin approved by the New York State Department of Financial Services (NYSDFS). To maintain the stability of the coin, Paxos conducts a monthly audit of the BUSD supply.

Initially, BUSD was based on the Ethereum blockchain, after the launch of the Binance blockchain, some of the tokens were placed on it. That is, there are now two types of BUSD tokens: ERC-20 tokens and BEP-2 tokens. This enables cross-chain exchange of tokens.

How Does USDT Work?

Tether or USDT is operated by the Bitfinex cryptocurrency exchange. It was launched back in 2015. Initially, USDT functioned on the Ethereum blockchain, later TPX-20 tokens, which are based on the Tron blockchain, became available. This is the most famous and most popular dollar stablecoin, which is consistently held in the TOP-5 of the most capitalized cryptocurrencies.

What Do BUSD and USDT Have in Common?

What Is the Difference Between BUSD and USDT?

Which Coin Is Better?

Since we are talking about two stablecoins pegged to the dollar, comparing their value is generally useless. For profit taking, it doesn’t matter if you trade SHIB to BUSD or prefer USDT. However, in terms of a combination of other parameters, BUSD looks more reliable.