How to Fix Xbox One Controller Joystick Drift (EASY!) 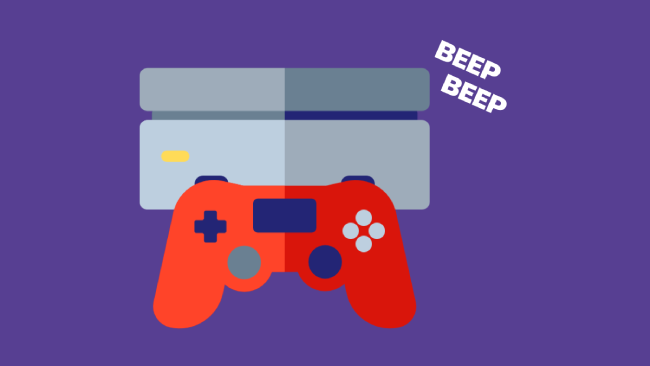 The PlayStation 4 was the best console for gaming in the last generation. Not only did Sony launch a console that was cheaper than the Xbox One, but the PS4 also had exclusive games that were far superior to whatever was available on the Xbox side of things.

But like any other electronic device, the PS4 is prone to running into issues. If you’ve landed on this post looking up “why does my ps4 keep beeping“, you’ve come to the right place. We will be discussing the issues due to which your PS4 randomly beeps and keeps ejecting discs.

Why does My PS4 Keeps Beeping?

It can be quite annoying when your ps4 keeps beeping and ejecting discs. While there are various different factors for your PS4 to be beeping and ejecting discs, one of the major ones being that the eject button on the original launch PS4 is quite fragile and somehow the rubber feet at the bottom of the console cause the eject button to be pressed, thereby ejecting the disc and causing the beeping noise.

Fixes to PS4 Beeping While Playing

If you have noticed your PS4 beeping while playing and randomly ejecting discs, this might be the fix you need.

This is such a trivial issue and not related to any of the electronics or software inside the PS4. In order to fix this, you just need to make sure that the PS4 is a bit lifted from the desk or shelf surface so it doesn’t push on the rubber pad, tapping the eject button.

There are ways to fix it, you can tear off a few pieces of paper and keep it right at the bottom at the four corners of the console to fix this and this will lift the console up from the surface, preventing the rubber pad from pushing on to the eject button.

Alternatively, you can use a rubber foot you can get locally or off of Amazon and attach it at the bottom of the console to lift it above the surface as well.

The first fix anyone should try if they face issues with any of their electronic devices is rebooting it. Before you restart, just take the disc out of the console and then hold and press the PS button on your controller to bring the overview screen. Once you’re on that screen, just choose to either turn off your PS4 or just choose the Restart button.

It will take a few minutes for the reboot to complete and once it is done, try inserting your disc again and see if this has fixed the beeping issue for you.

This is basically not an error but it’s an indication where the PS4 is telling you that it has not been able to shut down the console to Rest Mode properly. This can also mean that the console was not able to close a program while it is in Rest Mode.

You can also try unplugging the console completely from the electric socket. Once it is unplugged, keep the PS4’s power button pressed for 30 seconds and it will make a dual beeping sound. Once you hear that sound, restart the console and the beeping will disappear.

If you’re comfortable opening up the console yourself, do that. You can check this guide to do so. It’s not that complex and all you need is a size 9 Torx bit screwdriver and some force of hand.

Don’t dismantle it completely but open it up until you’re able to access the front PCB. On the front PCB, you will notice a gold contact. Take a look at the picture below.

This is the contact that may come in contact with a metal plating inside the console and setting off the eject function. The fix to that is quite simple. All you need is a PVC electric insulating tape and apply it to the gold contact. The image is below for reference.

Once this is done, close up your PS4 console and test if everything is working properly. Insert a disc and the beeping and ejecting issue will completely disappear.

Look, the PS4 is a great console. It was first launched in November of 2013. It’s been years since this great piece of technology has been serving people. These issues may just be the signs of aging. Most of them are also quite easy to fix and one can just DIY these fixes and the console will start performing again without any issues.