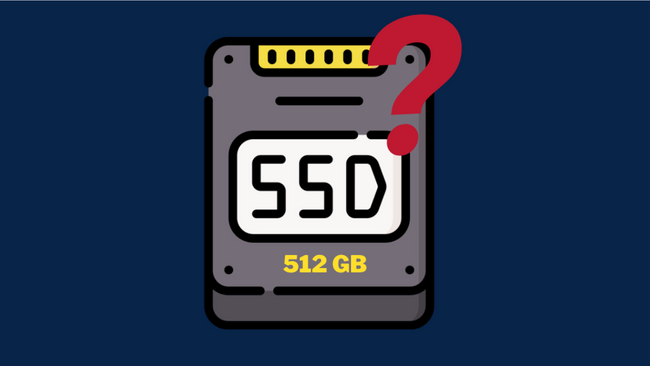 Are you about to get a laptop and wondering if a 512GB SSD is enough? Storage can be a confusing thing to decide about when choosing any device. On the one hand, you want to have more space for things. On the other, storage options are sometimes expensive.

Anyway, today, we will put this question — is 512GB SSD enough for a laptop — to the rest?

512GB SSD is satisfactory for most laptops, regardless of their intended purpose. Compared to HDDs, SSD storage provides you with better speed and reliability. You can count on a 512GB SSD for your gaming, and video editing needs as well. We recommend choosing a laptop with 512GB SSD over other variants.

A Solid-State Drive, better known as SSD, is a secondary storage device used in computers and other gadgets. In laptops, SSDs provide storage space where users can store their files. First, we shall attempt to understand how big is a 512GB SSD and what things you can keep inside.

Here’s a list of things you can store in an SSD of 512GB capacity. Please note

As you can see, the numbers are pretty high. But, of course, depending on the situation, the numbers will change. For instance, if you shoot in the ProRes format, a 512GB SSD can store fewer minutes of footage. In the same way, if you want to store uncompressed MP4 files, you can keep only fewer.

There are two options: NVMe and SATA.

SATA SSDs connect to the computer using a SATA port. It is an old system and offers limited speeds when it comes to data transmission. On the bright side, SATA SSDs are cheaper. So, you can find SATA SSDs on low-cost laptops.

NVMe SSDs connect to the computer using an M.2 port. Since they are new, NVMe SSDs can offer a better data transmission speed, making them suitable for gaming. In addition, NVMe SSDs are more reliable and come across fewer issues. Nevertheless, you have to pay a high amount for these storage devices.

Now that you know how big a 512GB SSD is, shall we see how these numbers translate to real-life situations?

Is 512GB SSD Enough for Gaming?

According to experts, SSD affects your laptop’s gaming performance. It is because SSDs can transfer data at a faster speed than conventional HDDs. So, your game files will load more quickly, resulting in a more immediate opening of the game.

Let’s consider the case of GTA 5, an incredibly large game with many resources. All the resources need to load before you can play the game. So, when you have an SSD instead of an HDD, you can start playing GTA 5 quickly.

How Many Games Can I Install on a 512GB SSD?

We cannot give you an exact number for obvious reasons.

However, to get an idea, let’s assume that a game title consumes around 50GB of storage space. In that case, you can store up to 8 games in a 512GB SSD.

Expert Tip: You should always leave space in your SSD, especially if your PC has lower RAM. It will help your PC to use SWAP memory for added performance.

So, unless you want to store more than 10 games on your laptop, a 512GB SSD is sufficient.

No, it does not. As we said earlier, SSD storage capacity may affect the game loading speed. However, it does not impact the FPS of the game. It is, instead, dependent on your CPU and GPU performance.

To sum up, a 512GB SSD is satisfactory for your moderate gaming needs. However, you should upgrade to a 1TB SSD if you want to install (and keep) multiple AAA titles on your laptop.

Is 512GB Enough for Programming?

If you are into programming, you should choose SSD storage over HDD storage. As you can guess, it is for the best speed of the device. As a programmer, you will have to deal with multiple files, which need to load as quickly as possible.

Therefore, an SSD drive will offer you an edge, along with apparent benefits such as quick startup.

Regardless of the programming language, development environments do not take up a lot of space. So, you will be OK with a 512GB SSD. It should offer you sufficient space to keep your development files and even some media content.

However, make sure you use an NVMe SSD instead of a SATA SSD since the former offers better speed and bandwidth.

To sum up, to answer the question if 512GB is enough for programming, the answer is YES.

Choosing an SSD for a video editing laptop is a different matter altogether. However, there are a few things to keep in mind while you do that.

You cannot equip your system with SSDs beyond a limit. For instance, you can have up to 1TB of SSD storage on the system. Still, it won’t be enough to accommodate all your media collections. Also, going beyond 1TB of storage can be crazy expensive, especially if you are getting a MacBook Pro.

You can equip your laptop with a 512GB SSD and use it to install the necessary software and components. After this, you can set up one of the following options to store your media files:

Both options are less expensive and more viable than buying a laptop with 1TB or 2TB of storage space. It is also a way of saying that a 512GB SSD is enough for most video editing laptops.

But, hey, if you don’t want the hassle of portable SSDs and NAS, you can get a higher storage space variant. You must be ready to spend a hell lot, though.

So, as we were saying, a 512GB SSD is the perfect choice for video editing.

SSDs on MacBook Pro devices have always confused people. As you know, Apple is infamous for its super-expensive upgrade charges for SSD. Because you cannot add storage later, you must equip your MacBook Pro with the right amount of storage.

So, if you need more storage on your MacBook Pro, you have two main options.

But, of course, the choice depends on many things. For instance, you cannot depend on iCloud storage if you want to edit videos or deal with heavy files. In these instances, you need onboard storage. So, you have to decide whether a 512GB SSD is enough for MacBook Pro based on what you use the MacBook Pro for.

If you use your MacBook Pro for tasks that do not require high-speed file transfer, you are better off with a 512GB SSD.

On the other hand, if you want quick access to all files, especially media files, you should consider upgrading to a larger SSD.

We do not recommend the 256GB SSD variant of the MacBook Pro at all. It offers limited space for you to keep your essential files and apps. Otherwise, you should be ready to enter the world of dongles and SSD enclosures.

Is 512GB Enough in General?

So far, we have discussed whether a 512GB SSD is suitable for specific purposes. Now, we think we can draw some conclusive points.

In all cases, though, you should stay away from a laptop with a 128GB SSD. Even though you may save some money in the short term, you will have to upgrade the device, purchase additional data storage later, or get a cloud storage plan.

By the way, there are some SSD-HDD combinations you should consider.

You may have noticed that many laptops come with a 256GB SSD + 1TB HDD configuration. Compared with full-SSD models, these devices are more affordable. However, have you wondered whether the configuration is enough for a laptop?

In many instances, a 256GB SSD + 1TB HDD configuration is enough for laptops. As you can guess, it brings the best of both worlds. On the one hand, your system/app files will be stored on the SSD, making those files available quickly. On the other hand, less frequently used files will occupy the space on the HDD. Your OS is smart enough to understand what is used more frequently and what is not.

So, you can enjoy all the benefits of SSD without spending a lot. However, we do not recommend this setup if you want to build a high-end PC for video editing or programming. In those cases, you should always pick a full-SSD configuration — even if it means going for low storage space.

Choosing a 512GB SSD over a 1TB HDD should be the easiest. Here are some reasons if you want:

So, if you are given an option between these two configurations, you should always go for the 512GB setup. If you are concerned about storage space, you can get portable HDD/SSDs or subscribe to cloud storage.

If you can afford a 1TB SSD, it is the better option. However, 1TB SSD configurations are not that affordable, especially when you buy a MacBook Pro. Alternatively, you can use a 256GB SSD + 1TB HDD configuration.

A 512GB SSD from a trusted brand should last for years, even decades. Moreover, you do not have to worry about the SSD becoming slower since the drive does not have many mechanical parts.

Yes, for most people, 16GB RAM and 512GB SSD are more than enough. Even some professional editors use laptops with the same configuration.

No, 512GB is not too much for a laptop. Considering the standard data storage needs today, 512GB of storage is the best option.

The Windows 10 installation, as such, does not consume a lot of space. So, you should choose the SSD based on your other needs. For example, 256GB SSD storage is the best setup if you need a PC for basic needs.

Do you still wonder about that question — is 512GB SSD enough?

We hope we have explained the ideas clearly. Here is a quick summary if you could not read the article thoroughly.

We believe this guide helped you choose the right SSD option for your next laptop or upgrade.